What are the Killing Fields?

Choeung Ek (Khmer: ជើងឯក) is the site of what once was an orchard and Chinese graveyard, but is now a mass grave of victims from the Khmer Rouge located about 17 kilometers (11 mi) south of Phnom Penh, Cambodia. Victims of this slaughter were killed between the years of 1975 and 1979. It is where the Khmer Rouge regime executed more than one million innocent people; men, women, and children alike.

I took a few Peer Leaders with me to the Killing fields memorial site on March 19th 2019.

Why did we go?

We decided to visit the memorial site, because so many of the elderly people that we had interviewed had mentioned that either a family member or friend had visited or been executed there during the Khmer rouge. There were even one or two interviewees whom had been there personally, during wartime executions, and had miraculously lived to tell the tale. One such story was told to me by Sokunthea Nhem, a Peer Leader of 3 years now. She was one of the first peer Leaders to encourage me to visit the memorial site, if I had not already done so (which I hadn’t yet.) She explained to me that her most memorable interview experience was involving a woman who had a nightmarish encounter with soldiers and victims at the Choeung Ek Killing Fields. This woman (I will call her Ming Vanna, for I can’t remember her name), Ming Vanna, was taken to the killing fields late at night. She was in a large group of young women and men, as well as a few young children. She remembers being forced into the back of a truck and driven to a dark field. She was escorted out of the truck and brought to the mouth of a wide, but shallow pit (not quite so deep as she was tall.) Then soldiers took bamboo rods and gun barrels and started to beat in the heads and bodies of those held captive. Once they were presumed dead, they were cast into the pit and left to rot. Ming Vanna was beaten and thrown into the pit too, but much to her surprise, she woke up to find that she was not yet dead. She described her fear at smelling and laying amongst so many dead bodies as one of indescribable power. Although she was bruised and sore, she was so frightened that she found the strength to climb out of the pit, and run into the night. She escaped with her life, but has always remembered those that were not so lucky as she was.

I had known about the Killing Fields as a full time missionary, but didn’t feel that I had the emotional strength to endure such a taxing visit as a missionary. I had never been before. After hearing this experience and so many others as an Interviewer for the Cambodian Oral History Project, I decided that it was time that I went and learned more about the difficult history behind the Khmer Rouge, first hand. I knew that many of the volunteers working with me were young and inexperienced. I decided to invite some Volunteers to accompany me so that we could all learn together, and support each other through this emotional visit to a place of so much horror and loss.

What did we learn?

I learned a lot about the difficulty and sorrow surrounding the Khmer Rouge that I didn’t understand before I made time to visit the Killing Fields. Although I had heard stories about the horrors and the pain that these Cambodian people experienced, I was always distanced from it. Although I believed their experiences (and certainly the pain at the memory from these experiences) to be real, I could never bring myself to dwell on these stories or imagine them happening in real life. Many of the Peer Leaders that I went with expressed the same kind of disbelief at the fact that these stories were, in fact, real. We never questioned them, but it was so easy to dismiss these experiences as part of the past, something distant and intangible. After visiting such a reverent place and seeing the bones and clothes of real people, who have been through this tragedy it seemed so much more real to me. I know that I can’t fix what happened, and I know that I can never really understand what these people went through during the Khmer Rouge; but I know that I am better off with an understanding that these stories are part of someone’s reality. It gives me a greater sense of empathy and a desire to help alleviate some of the pain and loss accompanied with  these interviews. I can be Kind and show greater interest in the elderly and their lives. When they talk, I can listen. I can show them that their lives mattered back then, and have meaning now. I can help them to remember those whom they have lost, and give them the opportunity to express love and to show love back to them. I am forever changed by my experiences both at the Killing Fields, and as an intern for the Cambodian Oral History Project. 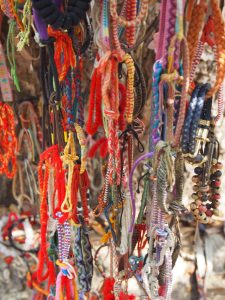 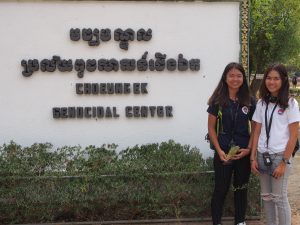 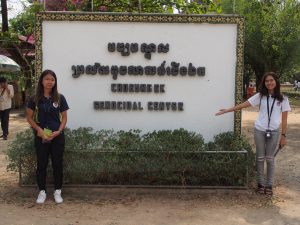