My name is Nhem Sokunthea. I’ve been a project peer leader for three years. I got involved with the project right after I returned from missionary service for the Church of Jesus Christ of Latter-Day Saints. I first learned about the project from former missionary Tyler Jorgensen when he was serving as an intern in Cambodia.

As a peer leader I interview Cambodian people, my siblings, and sometimes people I don’t know as well. However, I mostly interview those I do know well like my mom, dad, and older brother as well as those with many life experiences such as my grandfather, grandmother, and their family members. I try to keep it in the family. I also transcribe interviews into Cambodian script.

Besides my work as a peer leader, I am learning the violin. I’m not very good at it and find it SO HARD, but I do like it. I also like to visit farming areas and would like to have a farm of my own one day, to grow my own fruits and plants. I also love the province of Mondul Kiri, and I want to buy a farm that looks like something there. Although I’ve interviewed people that grow rice, I really want to learn from people who have grown other things, like cashew nuts. I did interview a cashew farmer once, and they had so much life experience and wisdom.

I’ve had many experiences interviewing people who had overcome great trials. They’ve seen the sun rise before we did. The older people I have interviewed have all been through the war. In fact, of 100 people I interviewed, every single interviewee lived through the Khmer Rouge period. They tell me their life stories, struggles, and challenges. Of course, we have our own problems, but really, we have it comparatively easy. We have the chance to be with our families. They didn’t have that privilege. They were separated and often killed off. They even had bombs dropped on them and they had a hard time running away. I’ve heard it said that the Cambodian people had eyes in the back of their head. That means they have their normal eyes facing forward, and then they had more eyes facing backwards. That means that at that time they had to be aware of their surroundings, if they dropped bombs and grenades, and you weren’t watching, you would die. You would be blown to pieces.

Through the project, the Cambodian people learn how savage their history is and can learn from it. They can understand that people died because they had no food to eat at all as they worked. They see that people used serrated palm fronds to cut people’s throats, or beat people to death with bamboo rods. I’ve heard stories about people who were executed and I’ve interviewed one person who was beaten and thrown into a pit of dead bodies. She was so frightened that it gave her the strength to climb out of the pit and escape. It’s something that I’ll never forget hearing. What’s important is that I can understand a little about their burdens. For my interviews, I ask a lot about the war experiences of my family members, though It’s difficult to hear about that unjust time in my people’s history, where we killed our own people.

I remember hearing my uncle’s story (as told through my father) more than anyone else’s. He Is the older brother to my father and had a wife and two children,  But Pol Pot took them and killed them all even though his wife was pregnant with a child. My father told me that they took my uncle, a learned man, and put him in a cage. It was similar to a cell in a prison. His family tried to come and visit him in this cage, but the guards wouldn’t allow it. So, they walked past him and could only spare a glance out of the corner of their eye to see if it was him. It was such a pitiful story. When I think about that story, I feel so frustrated, but I can now understand just how hard their lives were at that time. When my family heard this story felt like they couldn’t accept it.

My mother told me about when she was starving and had no food and how my father was the most skinny and gaunt man you had ever seen. When I go back to my parent’s home town a few times every year, I see two large trees near my home where I’m told is the place of my grandmother’s greatest loss and sorrow. It was in that place where Pol Pot took her children away and killed them, and it was in that place where she saw people starve to death. It is so difficult to think about those stories.

I think that after carrying out these interviews, I have a greater love for people. Each person’s life, has such value. Although I am a Christian and learned to love people serving as a missionary, I can now help in another way through this project. When I go to church I love to focus on family history. Our ancestors struggled in this life–– especially throughout the war––but we can help them to find peace in the next life through the temple. We can help them receive ordinances, be baptized, and live together and be clean and worthy from sin forever. I am so grateful for this project, which is helping to preserve the Cambodian history that we lost in the war. I love that this history is recorded by voice because anciently we didn’t have people’s voices, just a few books and written memories. As I go through these interviews I have an increased desire to learn and know about my country’s history and help my ancestors. 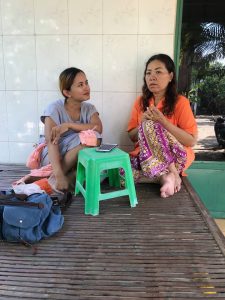