Eav Sareoun, a Cambodian refugee now living in America, shares in a video interview how he escaped death four times and what life was like for him in the Khmer Rouge. 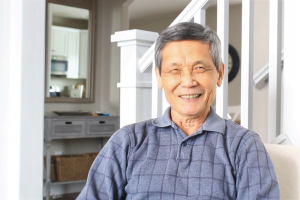 “[When] Pol Pot’s time began, I went to their village and then I did not have anything to say. And I didn’t have any clothes, I wore whatever they gave me and I never said anything, because they owned everything and they destroyed everything. It made me want to hope, hope that someday Cambodia would be happy. One day the country would be happy, even though Pol Pot stopped everything.

“I had a hard life from the age of 4, even up until today. I was always close to dying. The first time was when I was working on the lighting systems. I was supposed to die. And the second was when I was sent to the forest, and all of the others around me were killed. The third time was when I was sent to die falling from the palm trees. I almost died a fourth time when they sent me to carry the rice in my cart, and then that old man helped me fix it when it was broken and I thought myself dead already.”